A Brief History of Breaking

Breaking is said to have started in the South Bronx of New York City in the 1970s as a way of settling disputes instead of fighting. With flamboyant moves including spinning on one’s head or back, it has continued to develop to this day, far surpassing other street dance genres as a culture with roots in battling.
It received its name from the “breaks” in the songs that early DJs would play back to back knowing how hyped the dancers would get. Those dancers were then referred to as B-boys and B-girls. In recent years, not only has “street dance” become a required subject in Japanese schooling, but Breaking was even officially selected as a new category in the Youth Olympics held in Buenos Aires last year, marking the start of a new page in history.
Competitions often have 1 on 1, and/or crew battles, and rules and methods can also change depending on the event. Judging is mostly done in a subjective manner but there are increasingly more competitions that have introduced a scoring system by which to judge the dancers.

The Japanese Breaking scene started in the 1980s and has continued to grow over the past thirty years, creating dancers who have gone on to win world titles. Both the female Gold medal winner and the male Bronze medal winner at the Youth Olympics last year were Japanese, making the country’s high level of skill a household topic throughout the world.
Nevertheless, ever since Breaking gained popularity in the U.S., world championships have been frequently held in other parts of the world including France, China and Korea, but it wasn’t until last year that Japan finally held its own world championship, showing just how far ahead the rest of the world has become compared to the Breaking scene in Japan. One of the reasons for this is the strongly kept notion that “Breaking Sport” and “B-boys Athletes.”
And then, in February of 2019, Breaking was officially selected as one of the few possible sports to be included in the 2024 Paris Olympic Games. News of this announcement also made global headlines over-night. A new door in history has been officially opened for Breaking to become both a culture and a competitive sport.
BREAKARK ORGANIZER
PRO BREAK DANCER
B-boy TAISUKE Bio
Since his childhood, TAISUKE has won battle after battle thanks to his rare and well-honed style and has paved the way for other kids in the Breaking scene. Upon moving to Tokyo in 2007 his talent blossomed and is now one of Japan’s most recognized and predominant B-boys. He has won over fifty competitions both in and outside of Japan, including three consecutive world titles with his crew THE FLOORIORZ, a feat no other Japanese dancer has achieved. A pioneer in his own right, he is also the first Japanese B-boy to receive corporate sponsoring. With a broadly active career, he has been featured in various media including singer Daichi Miura’s music video Replay.
He also serves as a Tourism Ambassador of his home city of Sasebo in Nagasaki Prefecture, while THE FLOORIORZ are the Industrial Goodwill Ambassadors of Kawasaki City, Kanagawa Prefecture. 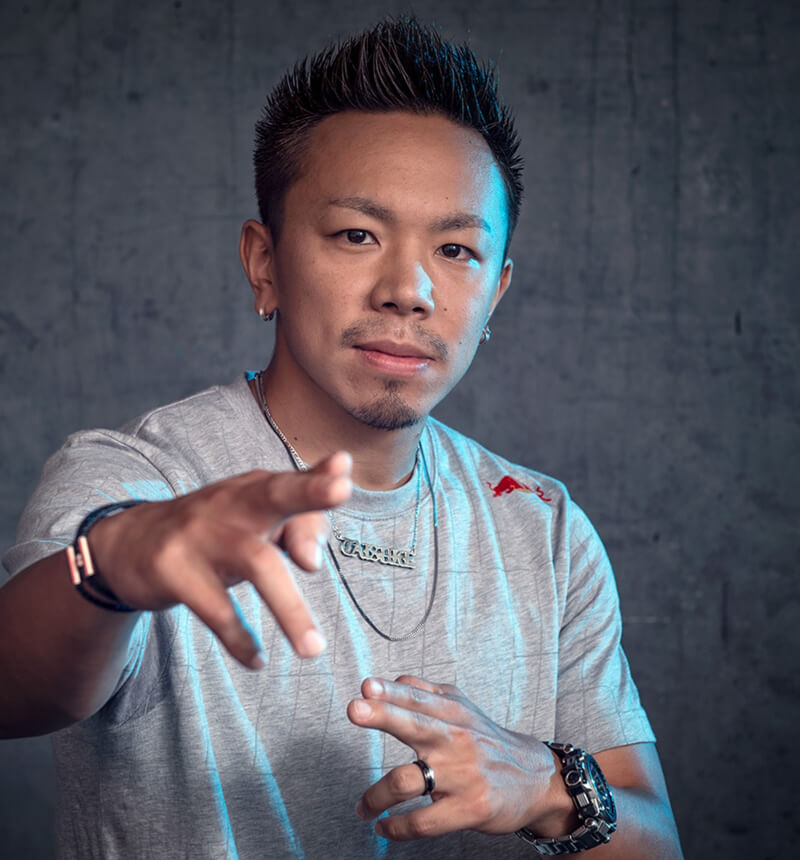